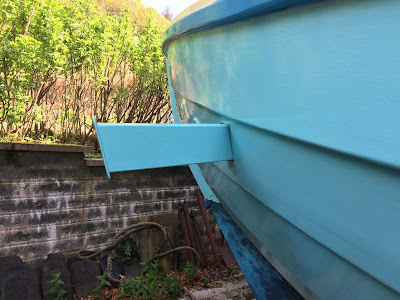 My original intention in providing the Mariota with auxiliary power was to build a conventional outboard well at the aft end of the cockpit and use a nice, quite light, 3hp Mariner outboard I had bought twenty or so years earlier and never used. After I had built the well, which included the painful exercise of cutting a hole in the bottom planks, I learned that two strokes don’t like operating in enclosed spaces; they misfire if not provided with plenty of air.
I wasn’t willing to finish the build and take a chance on this, so I decided to look for an alternative motor. Four strokes being heavy, expensive and very bulky, this led me to researching electric power and the purchase of a Torqeedo outboard, also expensive but very light. I’m comfortable with that decision and convinced that a nice clean unit is the way to go, but being slow revving the propellor is 12 inches diameter and would have required that dreadful hole to be much enlarged.
I spent a week or two surgically removing the well and filling in the hole, leaving myself with a nice little storage space to keep a radio or binoculars out of harm’s way, meanwhile thinking about an external bracket. 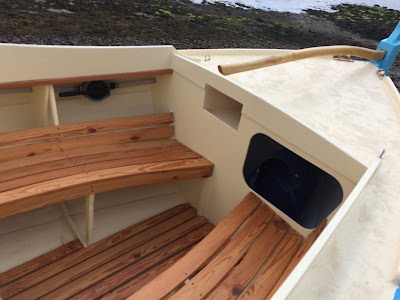 Freeboard on the Kotik design, an extended Wee Seal, is too high for even a long shaft to bury the propellor adequately. The motor has to be dropped nine inches or so, which means that there is enormous torque. My first attempt at a wooden bracket failed miserably, but with no injury of loss of life. What I thought was quite robust broke apart as soon as the motor’s full thrust came on and showed that any replacement would need to be a metal fabrication, probably with an extra fastening low down on the hull for security.
The guru from An Cala then arrived, examined the state of affairs and came up a with a solution that is simple and strong. It’s a sliding beam that travels within a strong wooden box behind the aft bulkhead, easily pushed out when required and unnoticeable when it’s not. The box is bolted to the bulkhead, but for additional security I’ve added an oak bar. The beam itself is oak. At the outboard end I’ve added a plate, so that we know it’s fully home when not required. 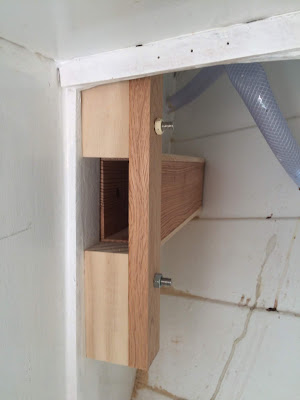 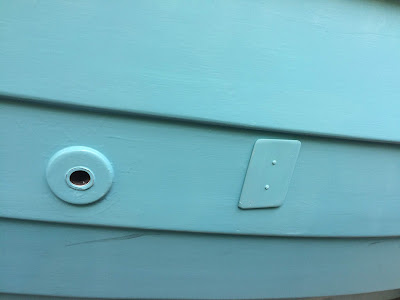