A short Summer Trip that ended with some fun 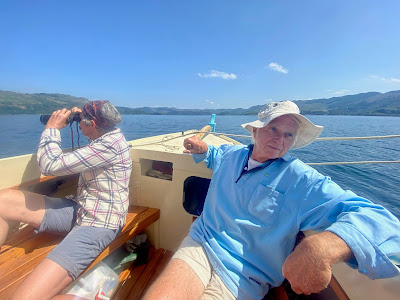 At last there was a prospect of nice settled weather, sunny with gentle breezes, so it seemed a good idea to set off for a couple of days. With a fine crew, The First Mate and her pal, the newly appointed Cabin Girl being both on annual leave we duly left the anchorage in Loch na Cille in light airs and drifted down the loch on a falling tide, the idea being to stop for lunch at Caisteal nan Coin and wait for the Cuan Sound to open its gate for us two hours before High Water Oban. In the event we were there pretty well at opening time and found a gentle breeze as we entered, giving us the required ability to steer, although in the Sound the tide does most of the work. 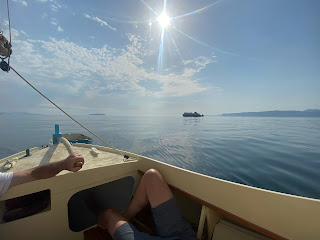 Not generally appreciated is that the tide is still falling during those two hours. The outgoing water travels West before taking a turn to Port and joining the last of the ebb down past Fladda light. At that point the wind failed us, we rigged the Torqeedo outboard and headed North at a gentle pace to conserve electricity, giving us a speed of 1.5 knots that doubled as the flood came up. 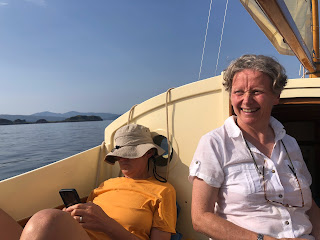 After six miles, when we had hardly dented the reserve in the battery, a nice breeze came up and we were able to anchor under sail in Garbh Airde. We set a tripping line, essential here because the kelp is really growing and there are few visitors to this long narrow cut in the land, with high rock on one side and reefs lurking just under the surface on the other.
Once settled we were delighted to see the lovely, historic Kentra at anchor in a slightly wider bay half a mile away. Beyond her a forest of masts in Puilladhòbhran, basically a parking lot these days and probably too busy for the otters after which it’s named. 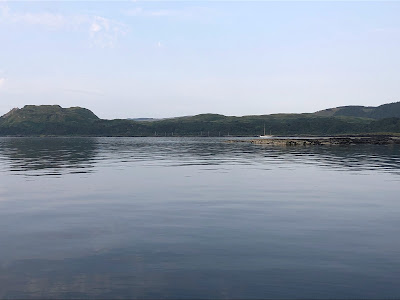 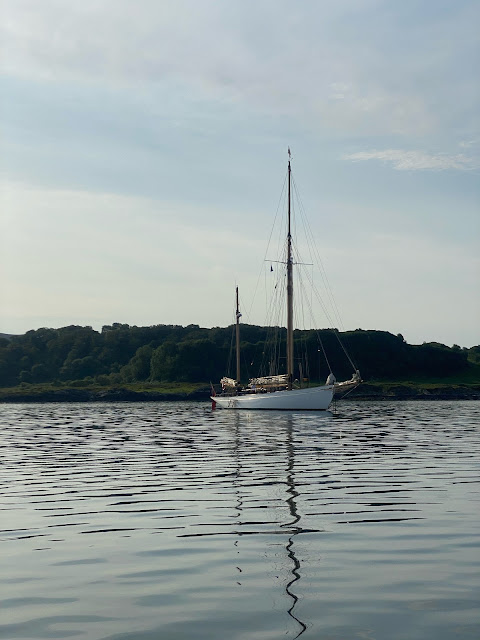 Dinner ashore supplied by the CG in the encampment she and the FM had established, venison meatballs in tomato sauce followed by chocolate. Then the Kentras arrived for strawberries, bringing with them an invitation for breakfast next day, which we felt we couldn’t refuse.
I love the Kentra, now in rather better shape than when I first came across her thirty years ago. She triggered one of the most fascinating and complex episodes in my career and was responsible for numerous friendships.
I’m always thrilled to see her on her West coast excursions. Named after a bay beloved by her first owner she’s the prime example of the very best of Scottish ship craftsmanship, launched from Fairlie in 1923. She also my favourite Fife yacht by far, designed to take her folk anywhere they choose and weather the World’s worst storms.
We were collected for breakfast and a good chat about the Middle Ages (of the Western World that is, not ourselves), then ferried back to the bay we’d made our base. 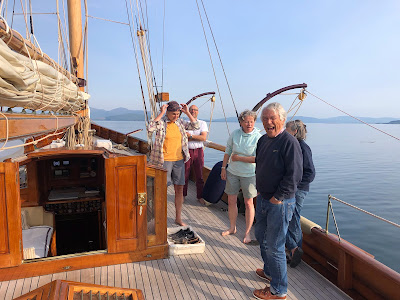 With no sign of wind the day was spent walking, reading and exploring the interesting bays along the North coast of Seil in the tender.

I visited the ancient MacDougall stronghold of Ardfad, confiscated by King Robert the Bruce in January 1313 and given to the Campbells, about which you can read more here: The Campbells 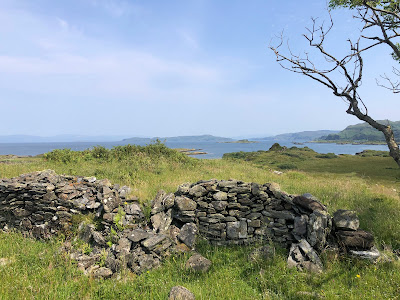 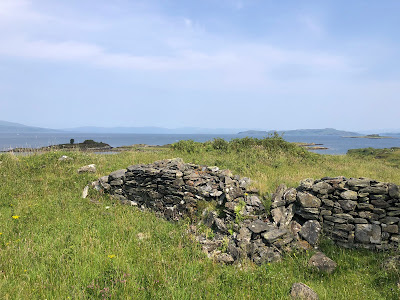 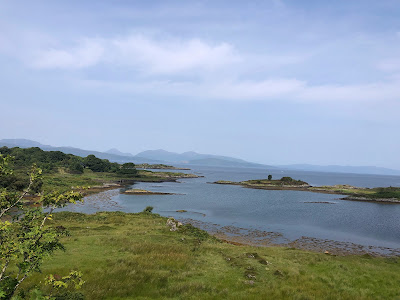 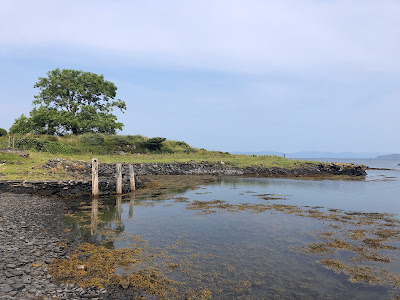 Day Three started calm, plenty of time for breakfast, packing up to leave not a trace onshore, before our planned departure time of 1030, an hour before High Water. The anchor duly dekelped, we drifted round the rocky point and headed South into an extremely unpleasant and increasingly bumpy swell, rocking the minimal air from the sails and unsettling us physically and mentally.
We decided to hold to seaward of Easdale, as to return through Cuan would have deprived us of the fun of the passage down the Sound of Luing. What fun it turned out to be. Just past the shelter of Insh a breeze sprang up and within five minutes had risen massively, accompanied by a strong Atlantic swell, ruling the idea of heaving to to tie in a reef safely. 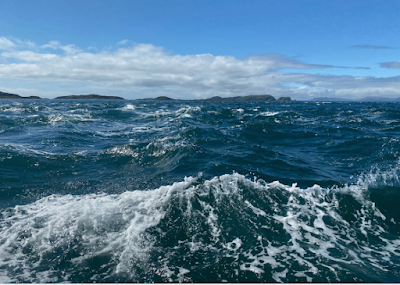 The clips give a better idea of what the next forty minutes were like. Under full sail Mariota flew, always under control, her buoyant ends coping perfectly with seas that were more blocks of water than definable waves. These were by far the most testing conditions I’ve been in with her since launching her in 2019.
The seas flattened greatly past Fladda and the passage to Ard Luing seemed to take just a few minutes. We squared off for an interesting gybe; the CG took over the helm for the stretch down past Shuna and I settled down for a rest and a drink. 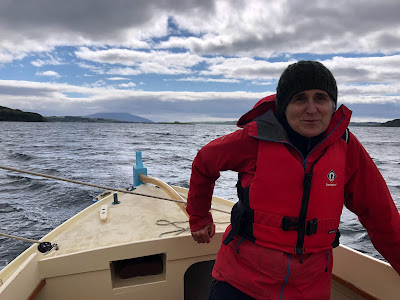 The fun wasn’t quite over. We decided to take in the first reef and while doing so noticed that the cap on the tender’s daggerboard had been lost in the turmoil, with the result that she was rapidly filling up.
The FM and the CG took turns to bail her out and we reckoned we’d make it home before the problem returned. The CG then took us on a close reach down to Arduaine, followed by a half hour’s run back to the mooring.
Posted by Ewan at 11:58