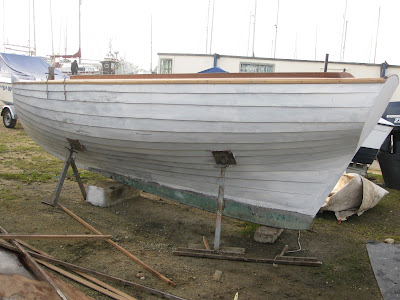 Avid readers of this blog (you know who you are, I don’t) know how I love a good mystery. If you guddle through my earlier posts from 2010 onwards you’ll find my attempts to trace the histories of long-disappeared yachts and their owners, which have resulted in occasional successes and one or two tales of maritime adventure and even espionage. On reflection it’s actually quite surprising that so many old craft, built as they were in an impermanent medium and often used hard in rough conditions actually survived, the more so when one reflects on the habits of the early owners of racing craft who cannibalised an older boat for rig and fittings for the new one.

Occasionally the hours spent originally in libraries when I started out in a pre-internet age and now done online from a remote corner of Scotland produced real and very satisfying results. Earliest was the discovery that the Scottie survived as she approached her first century, still making ripples on the Wansee.Read that post here:- Scottie, a tale of espionage

More recently I posted on the one-designs of George Lennox Watson here:- The Clyde 17/19 foot Class

I suggested that his nineteen foot lugsail boats created for the Clyde Canoe Club in 1886 were possibly the oldest one-design class in the World. I had to be tentative, as I knew that the Dublin Waterwags of the same year make this claim, supported by the advertisement placed in the Irish Times of 18 September 1886 by their founder Thomas B Middleton, which started off


“It is proposed to establish in Kingstown a class of sailing punts, with centreboards all built and rigged the same, so that an even harbour race may be had with a light rowing and generally useful boat…..”

At that time I didn’t have a precise date for the Watson boats and also didn’t want to upset the Irish friends whom I meet mostly in cyberspace but sometimes also along our shores, but help has now arrived in the form of Martin Black’s masterpiece “The Art and Science of Yacht Design” which arrived here recently and has put paid to all work around the house for the time being and coincidentally published by some of those Irish friends. Martin records the Dumbarton Herald of 18 August 1886 reporting

“Early in the present season the Clyde Canoe Club ….. resolved to add to their fleet of lugsail craft, three lugsail boats…. and on Saturday last, 14 August, the three left the Leven for Gareloch…”

The first boats of both classes were built by R McAlister & Son of Dumbarton. It would be fascinating to read any surviving correspondence among the promoters of the two, as we know there were very close family and sporting connections across the Irish Sea at that time.

So there we have it, nearly a dead heat and certainly a victory for the Celts, as both classes beat the Solent by a couple of years.

In my original post I recorded three more boats built in 1887 and a final one in 1888. Martin reports a total of nine, the first three named Red, White and Blue, three more built by McAlisters in 1887 for the Royal Clyde YC, which he doesn’t name and a final three in 1891 by Paul Jones of Gourock, also unnamed.

Confusion is caused by the emergence of another class hot on the heals of the first one, the 17/19s, about which we know quite a bit. To which class did Banshee and Nell belong?

In my post I wrote that we didn’t have photographs of the earlier boats and posted the lines and sailplans, copied here:- 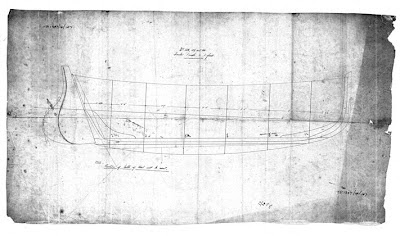 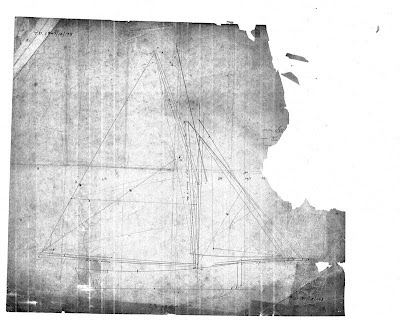 Here is a half model of Red, which is just a wee bit clearer than the above. 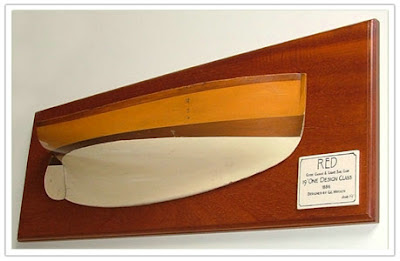 But I have now learned that one of them, Banshee, still exists. Not only that, she’s for sale, via Gareth Worters of the Dauntless boatyard. Contact details are posted below.  To me she looks like one of the original boats and not a 17/19, which generally weighed in at 3 tons and seem to have much deeper keels.

She’s had a very thorough professional restoration, including making and fitting a new stem, stern post, lots of planking repairs and reframing and an entire new deck structure. From the photos below it seems she’ll need very little, apart from a final coat of paint, to get her sailing again. Gareth tells me that there’s a good set of spars, finished to a high standard and a suit of sails. 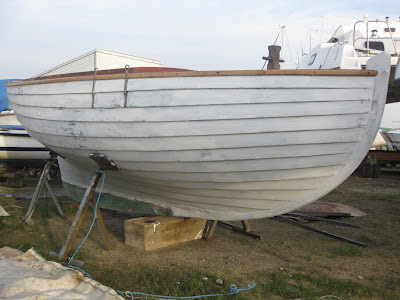 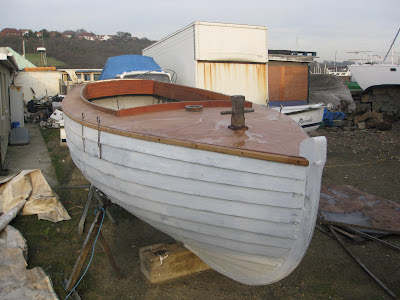 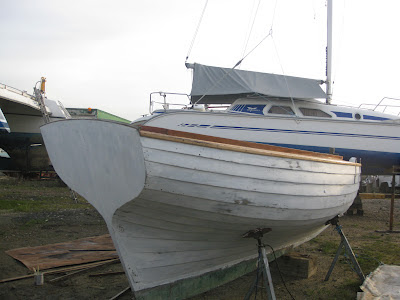 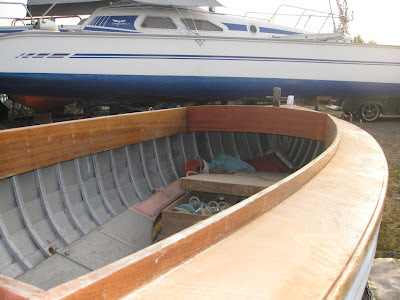 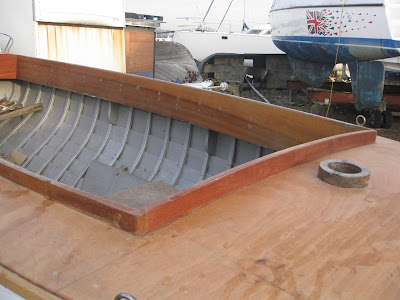 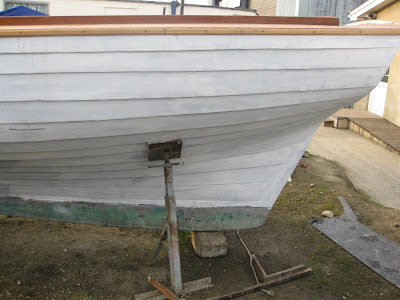 As visitors will know this blog is unmonetised and totally non-commercial and I want to keep it that way, but I am happy to help friends in the world of old boats. If you want to pursue the Banshee further you can find Gareth on garethdauntless (at) aol.co.uk.

And if you miss out on the Banshee, don’t forget that Hubert Stagnol is building and has maybe finished (I haven’t heard from him for a while) another of the original design in France, about which I posted here:- Red lives again